How and where to buy Polkadot (DOT) cryptocurrency?

Buying Polkadot - what should you know?

The Polkadot cryptocurrency is a fairly young project that has hit the top 5 of the world’s largest cryptocurrencies and gained a lot of recognition. Polkadot is an innovative idea that aims to create a communication system between blockchains. It is intended to allow multiple chains to operate within the scope of a single network.
If you want to learn more about Polkadot, we encourage you to read the article. If you decide to buy, you can do it by clicking the button below and registering a free account on the Binance exchange: 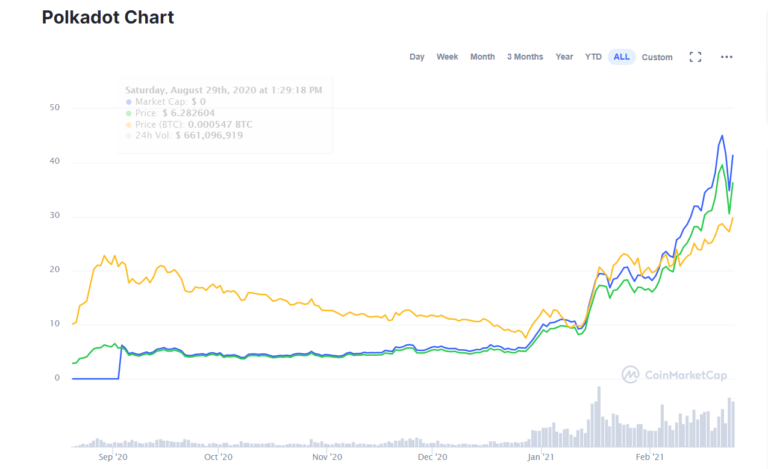 The project’s story began in 2015, when two former Ethereum executives – Gavin Wood and Jutty Steiner – founded Parity Technologies. The Web3 foundation also provided financial support. Initially, the group’s task was to develop node software for Ethereum. However, they withdrew quite quickly from this research to be able to fully focus on developing Polkadot and the Substrate project. The first results came in November 2017, when the developers presented the first code.

The project could be further developed thanks to ICO fundraising – in 2017, the developers raised $145 million, which was used for further research. The following year two proof-of-concept algorithms became operational, and a few months later the first parachain was implemented. After more than a year the developers asserted that “2020 is the year we can put the final details in place and start moving in. In reality, this means launching the Polkadot network with a phased rollout of various features.” Eventually, Polkadot was launched in May 2020, with token transfer capabilities introduced in August of the same year.

Polkadot – what is it?

Polkadot is meant to solve the problem of isolation of blockchains, as in their current form they have negligible ability to communicate. This innovative project supports multiple blockchains through a mechanism that is called sharding or parachain. This enables the efficient processing of several transactions simultaneously. A special interoperable design allows information to be transferred between parachains. An additional advantage is that the operation of each parachain can be adapted individually to a specific task. Moreover, the work on the whole system has also been made much easier – new features can be added to the project without creating hard forks.

The structure of the Polkadot network consists of several elements. The central part is the Relay Chain, which is the main node through which parachains can cooperate. When new users just want to try out Polkadot, they work on alternative, “lighter” parathreads. The final part of the network are Bridges, which allow Polkadot chains to communicate with other blockchains.

Different operators are assigned different functions. Nominators deal with staking, i.e. storing funds in a cryptocurrency wallet, which is designed to keep blockchains running safely. Nominators also select Validators, whose job is to stack tokens and validate proofs, created by Collectors. The fourth group is the Fishers, who look at the operation of the network and report any abnormal behavior.

The applications of Polkadot parachains are extensive: from transaction chains, identity chains, file storage or IoT (Internet of Things) to privacy chains.

Substrate is a special structure for building blockchains. It does not apply only to the Polkadot system – chains can also be created outside this structure. The role of the Polkadot network is to ensure communication and security between blockchains created with Substrate. This means that features can be added to or removed from parachains that are not core properties of Polkadot chains – these can be, for example, smart-contacts known from Ethereum, ZK-snarks proposed by Zcash or UTXO transactions belonging to Bitcoin.Thank’s for providing this content to gielda-kryptowaluty.pl portal which is giving many interesting advices about cryptocurrencies. It’s quite and young project but it’s on the top of cryptocurrenies rankings.

DOT tokens first appeared in 2017 with the start of ICO collection. Thanks to the sale of coins, the creators obtained about $145 million for the development of the project. Half of the original tokens were lost due to an error in the Ethereum Paritys wallet – the funds were frozen and could not be recovered anymore. However, this did not have a significant impact on the project itself.

In 2020 Polkadot allowed users to trade with other coins, and DOT was launched on dozens of cryptocurrency exchanges. DOT is a multi-functional token – in addition to conducting transactions, it also allows for management, bonding, and staking.

Due to its high turnover, the DOT coin has a very high market capitalization. Polkadot has been redenominated a hundred times since its creation, but this has not changed its value. DOT is available on major cryptocurrency exchanges such as Binance, Bitfinex and OKEx. It comes in pairs with such popular coins as Tether or Bitcoin, among others. Currently, as of early 2021, one Polkadot is worth about $35.